The Fainting Room + The Imperial Sound

This free, outdoor, fine arts festival features 65+ fine artists selling their work and 15+ chalk artists from across the nation creating ephemeral masterpieces before your eyes.

Art activities for all ages are offered throughout the weekend along with live entertainment and music, food vendors, a beer garden, an art raffle, and free admission for the weekend to the Museum of Wisconsin Art. 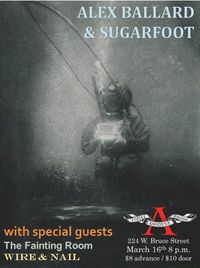 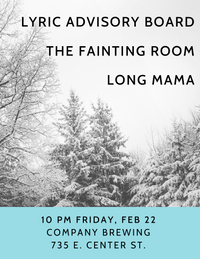 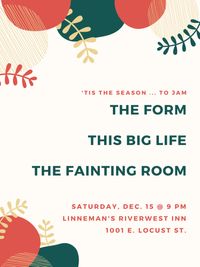 This Big Life, The Fainting Room & The Form 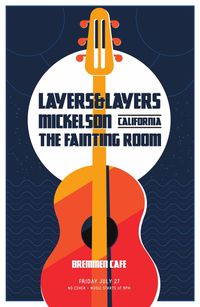 The Fainting Room, Layers&Layers and Mickelson

Scott Mickelson was born and raised in Massachusetts, Mickelson has lived in the Bay Area since the 80’s. In San Francisco, Mickelson can be seen performing at the top venues including The Fillmore and Great American Music Hall. When not on tour, Mickelson produces from his Marin studio. Mickelson’s second full-length record A Wondrous Life will be released in May of 2018.

The Fainting Room is a mashup of Americana, folk and rock. Check out our latest full-length album, "Dusk," on Bandcamp, iTunes, Spotify and CD Baby. 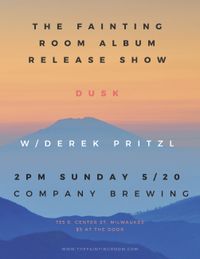 Join us for a Sunday Funday Release Show for our first full-length, Dusk. Derek Pritzl opens with a solo set at 3. 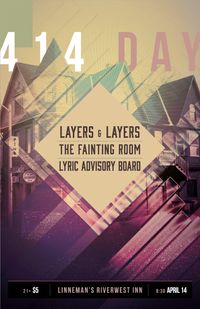 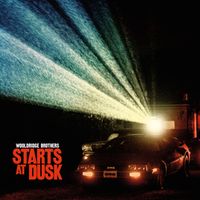 Join us for the Wooldridge Brothers' release of their sixth album, "Starts at Dusk." The Fainting Room will kick off the night as a three-piece configuration (sans drummer Ricky).

Coincidentally, music starts at 8 p.m. sharp, quite close to dusk - and The Fainting Room's set will feature a song called "Dusk!" 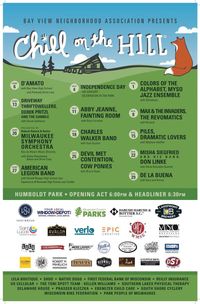 Chill on the Hill: Abby Jeanne, The Fainting Room, and Bryn Lorraine

Bay View Neighborhood Association puts on Chill on the Hill in partnership with the Milwaukee County Parks. The popular event was named People’s Choice – Best Venue by the 2013 WAMI Awards, and “Best Outdoor Concert Series” in 2010 by Milwaukee Magazine. http://www.bayviewneighborhood.org/chill_on_the_hill

The Fainting Room at Linneman's

Sharing the stage with Layers&Layers and The Form

The Fainting Room at Var Gallery

Ali Thomas opens the evening at 7, the Fainting Room takes the stage around 8, and The Watchbirds finish up the evening at the intimate Var Gallery. $5 suggested donation at the door.

The Fainting Room @ Music at the Market

We're stoked to return to this seasonal music series at Horicon's beautiful Kiwanis Park! Pick up some fresh produce and wares from the farmers market vendors, and bring your chairs and picnic blankets so you can settle in for a fun evening! Check out the summer lineup here: http://www.horiconphoenix.com/music-market-weekly-summer-concert-series

The Fainting Room & The Lyric Advisory Board 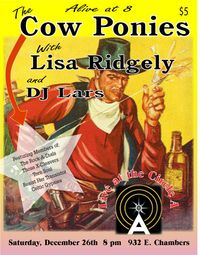 Come for dinner and stay for a drink and some live music, free of charge!

Milwaukee's Lisa Ridgely and Ryan Elliott, of Lisa Ridgely & The Fainting Room, will start off the evening with a set of originals -- we'll also debut a few new duets.

Next up is Massachusetts singer-songwriter Heather Maloney, who's got a pretty yet ballsy and unique sound I know you'll really dig! She'll be playing with her guitarist. Read more and check out her music: http://heathermaloney.com/about/

We're happy to return to the "Music at the Market" summer music series in Horicon! Learn more here: http://www.horiconphoenix.com/music-market-weekly-summer-concert-series.

Join us for a rare afternoon, outdoor, free appearance at the 2015 Summer Soulstice Music Festival! We're thrilled to be a part of a solid list of local bands playing at the festival's three stages throughout the day. Get there early to check out Ian and The Dream, and stick around after our set for Twin Brother, Traveling Suitcase and Tigernite (among others)! For details and lineup, check out the festival page: http://www.theeastside.org/happenings/summer-soulstice 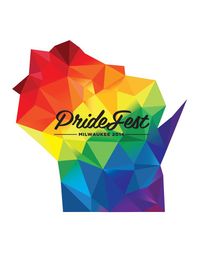 We will be scaled down and performing as a three-piece (Lisa, Sara and Ryan) at the Womnz Spot Cafe on the south end of the PrideFest grounds. Check out the line-up and get more info here: http://pridefest.com/lineup/womnz-spot-cafe/.

Est. 2011 in Milwaukee, The Fainting Room’s sound is acoustic singer-songwriter meets Americana twang and harmonies meets screaming rock guitar solos. It’s a potent and dynamic mashup of the genres that influence the band as individuals and as a group.

Accolades
Dusk was named one of the Milwaukee Record's 25 best Milwaukee albums of 2018.

"The wry feminism indicated by The Fainting Room as a band name might give you an idea of what to expect from frontwoman Lisa Ridgely’s incisive lyrics, but that’s just one facet of her songwriting talents. Dusk, the group’s first full-length release following a couple of prior EPs, touches on a wide range of interpersonal relationships, including the sometimes troublesome modern live music experience. “If you’re just gonna check your phone / Well you should’ve stayed home / ‘Cause I’m not blind,” Ridgely sings in “Turning Me On,” echoing the frustrations of any serious music fan as well as probably every local musician. The band’s lush twang puts a lovely new spin on Paula Abdul’s “Straight Up,” and the devastating album closer, “Kill A Man,” is perhaps Ridgely’s most potent musical statement yet." - The Milwaukee Record

"After the initial disclaimer, the band bounces from a reimagining of Paula Abdul’s “Straight Up” to the yearning, titular track “Dusk,” all the while exploring the anxieties and self-awareness that come with transitioning from young adulthood. The final track, “Kill A Man,” comes as a bit of a surprise lyrically when juxtaposed with some of the heartstring-pullers, but beneath the surface it is a statement about confidence and strength against toxic-masculinity." - Mike Holloway, The Wisconsin Gazette

“[Heart Hot is] a terrific five-song collection that represents a confident leap forward in songwriting, production, and identity. …  ‘Stopgap Girl’ gets to the heart of what makes Heart Hot so winning: effortless melody, refined songwriting, a wry sense of humor, and Ridgely’s newfound sense of self.” - Matt Wild, The Milwaukee Record

Highlights
Performance highlights have included playing at Milwaukee's Chill on the Hill and Summer Soulstice; opening for Katrina of Katrina and The Waves at Shank Hall, Madison's Count This Penny at Club Garibaldi, Kristin Hersh at Shank Hall, and Caroline Smith at the Riverwest Public House; and playing at the Porcupine Mountains Music Festival in Michigan’s upper peninsula. The band has split bills with some of their favorite local groups, including Testa Rosa, Field Report, the Crooked Keys, Hello Death, Caley Conway, Derek Pritzl and the Lyric Advisory Board.

Members
Lisa Ridgely started performing as a singer-songwriter in 2009, and had collaborated with local musicians including Sigmund Snopek and Chris DeMay before starting The Fainting Room.
Ryan Elliott, 2012 WAMI Award-winning Guitarist of the Year, has played with local bands for more than two decades, including The Form and Great Lake Drifters.
Sara Moilanen, 2011 WAMI Female Vocalist of the Year, plays bass and does heavy lifting on vocal harmonies. She is also a member of the vintage Americana trio The WhiskeyBelles.

Available digitally at CDBaby, iTunes, and bandcamp. Available in CD format at the Exclusive Company on Farwell in Milwaukee.